Pictures by amateurs from France:

The series of pictures underneath was taken by a family of the city of Grenoble who had just bought of a house at the edge of the road of Olmo in Corsica, at about 20 kilometers from Bastia. When they were ready to take photographs of their new residence a disk shaped object crossed the sky. Three particularly clear pictures of the craft could be captured. It is possible to reconstitute the trajectory of the craft by superimposing the three photographs. Moreover the distribution of the shades seems to confirm that these photographs were indeed taken little before laying down it sun. 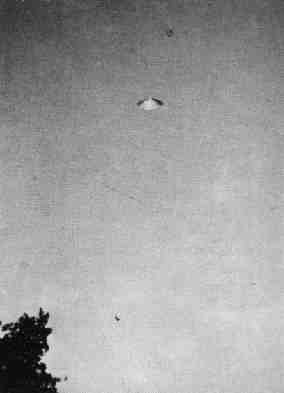