Yes, there are UFO events in space also: in 1988, the Russians sent two spacecraft to Phobos, and both failed to fulfill their mission. Before the second one lost contact with earth control, an infrared photo showed a strange elongated shape which does not fit in the place.

DID PHOBOS PROBE MEET WITH A UFO?

Maybe one of the mission's goal was to find more about the strange chain craters on Phobos? (January 1977 issue of 'Astronomy' author anonymous).

On March 28, 1989, Russian ground controllers suddenly and unexpectedly lost contact with their Phobos 2 probe. The very last close-up infrared photo of Phobos snapped by the spacecraft shows 'an object which shouldn't have been there'. 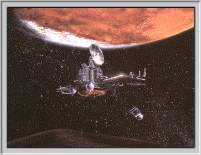 The Phobos Mystery Object (PMO) as it was referred to was soon believed to be a UFO by some. It was also speculated that the Russian mission had been deliberately terminated by aliens unwilling to let Phobos 2 approach the moon, supposed to be an artificial avant-poste of alien visitors on their way to earth. This scenario fit with the other mysteries: the supposed hollow nature of the moon suggested by its strange gravitational behaviour, its strange closeness to the Martian surface, its visionary discovery by Jonathan Swift, the failure of Hershell and others to discover it and the sudden discovery by Hall that suggested it was not there before, the failure of Phobos 1, and all the other more famous Martian mysteries.

The final infrared picture photo of Phobos occurred just three days before the communication failure, it reveals the outlines of both Phobos and the PMO. All surface detail is washed out on both objects which is very common in infrared pictures.

If the PMO was at the same distance as Phobos itself, it would be about 2 kilometers wide and 20 long. Its surface brightness is the same as that of Phobos. The sides of the PMO are perfectly parallel; it is rounded at both ends; the end towards Phobos narrows slightly; the other end seems to have a slight protrusion. An attempt to explain the presence of the object was that...

...since the PMO does not appear to have a metallic surface and displays no antennas or other indicators of artificiality, it is reasonable to ask whether it might be some natural phenomenon. One possibility is that the PMO image is only a "trailed moonlet;" that is, the smeared image of a small piece of debris also in orbit about Mars but moving at a slightly different velocity from that of the spacecraft and Phobos. Since the exposure time of the last photo was 8 seconds, a smeared image due to the PMO's relative motion is reasonable. (Anonymous; "Mystery Object Encountered by Russian Phobos Spacecraft," Meta Research Bulletin, 1:1, March 15, 1992.
This new newsletter, edited by astronomer T. Van Flandern, focusses on astronomical anomalies. Address: P.O. Box 15186, Chevy Chase, MD 20815.)

Of course one wonder why a UFO should have an antenna, and why an antenna -a thing supposed to be rather small- should be seen on an infrared photo blurred enough not to reveal the Phobos craters properly.

One can also suppose that a smeared image of a moving debris would result in a regular trail, not a trail with a narrow beginning, a long enlargement and a slightly widened head. Unless maybe the debris changed speed inside the 8 seconds exposure, which would raise more questions.

Then, If it is not a trail, the elongated shape would be a sufficient indicator of artificiality or at least strangeness.

Actually there is a second strange Phobos 2 photo, an elongated shadow on the Martian surface, that was considered as an UFO shadow by some. It is certainly a source of great confusions when rational explanations are provided on this photo while the other is ignored and vice-versa.

Cover-up? here is the personal report of a Canadian citizen who witnessed the event broadcasted on national TV in Canada. A very valuable report indeed as far as both the Phobos 2 strage evenrs, and media attitude towards strange events, are both considered.

The NASA 'Mars Observer' was launched from Cape Canaveral in late 1992, on a 337 day voyage to Mars to photograph Mars and its moons. The Mars Observer initially was expected to arrive at Mars by 19 August 1993 and enter a long, elliptical orbit over the poles. In mid November 1993 it was to begin its two year mapping of the surface of Mars. Then suddenly, on 22nd August 1993, NASA lost contact with the spacecraft.

Americans and the world mourned the loss of a valuable scientific tool for understanding Mars. Taxpayers wondered if there was a better way to spend their money than on expensive space probes that didn't work. After this failure and the previous failures, it was generally felt that a dark shield was going up on new information about Mars to the public at large.